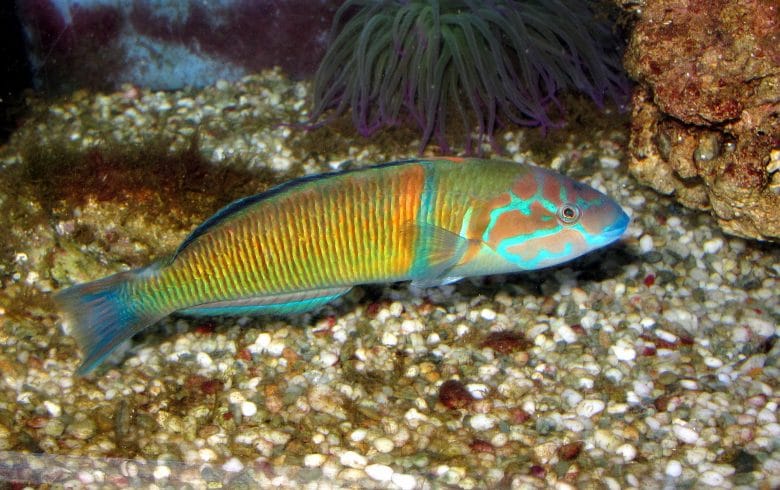 Did you know ?
Like the rainbow wrasse, it burrows into sand or gravel at night.

Ornate wrasse have very variable colouring but as adults, they have distinctive turquoise markings, while the juveniles are all green with a black spot in the middle of their backs just under the dorsal fin. The females are greenish-brown with thin transversal streaks and five transversal blue bands. The males are yellowy-green with the same vertical streaks and a single blue band behind the pectoral fins, often with a red outline. Their heads are partly purplish-red with a blue pattern. The caudal fin is forked in adults. The ornate wrasse is a protogynous hermaphrodite and swims with quick jerky movements as it hunts for small molluscs and crustaceans. Males can grow to 25cm. This species is mainly found near the surface in Posidonia seagrass but can descend to 150m deep. They can be found in the Mediterranean except in the Black Sea, and in the Atlantic from Portugal to Cape Lopez. They are more abundant in the southern Mediterranean but with global warming they have appeared off the coast of Provence in recent years.