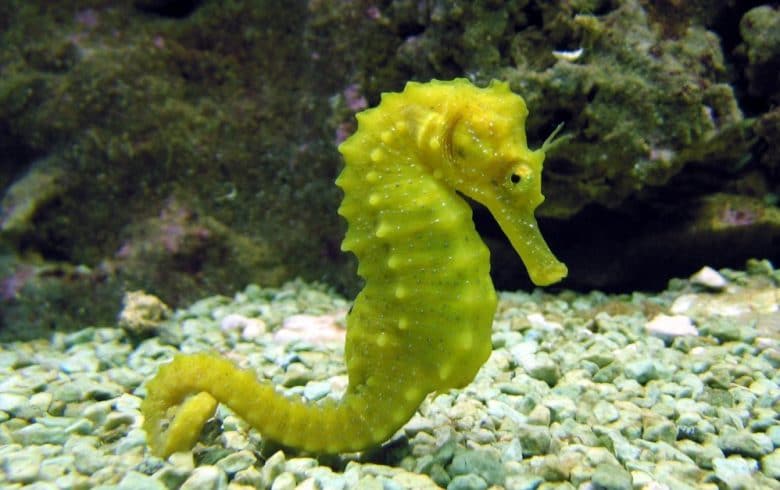 Did you know ?
The male has a brood pouch on its stomach where the females deposit their eggs during mating. About a month later, the pouch undergoes strong contractions and young seahorses measuring between 8 and 15mm are expelled.

There are two species of seahorse in the Mediterranean, Hippocampus hippocampus and H. guttulatus. Their colour can be brownish or blackish and sometimes H. guttulatus is bright red or yellow with little blue spots. Its head is at right angles to the rest of its body, and H. hippocampus has a smaller snout. It has no fins on its tail but can wrap it around something to hold on. It measures about 15cm and is a very poor swimmer, moving slowly in an upright position using its dorsal and pectoral fins. It hunts for small crustaceans or fish fry that it captures with a swift movement of its head. The species is not protected and is becoming increasingly rare.
They are found in Posidonia and Zostera seagrass and in seaweed between the surface and 50m deep. Both species are found all over the Mediterranean including the Black Sea, and in the Atlantic from south of the British Isles to the Gulf of Guinea.