› Articles › Biodiversity: can the fan mussel still be saved ? 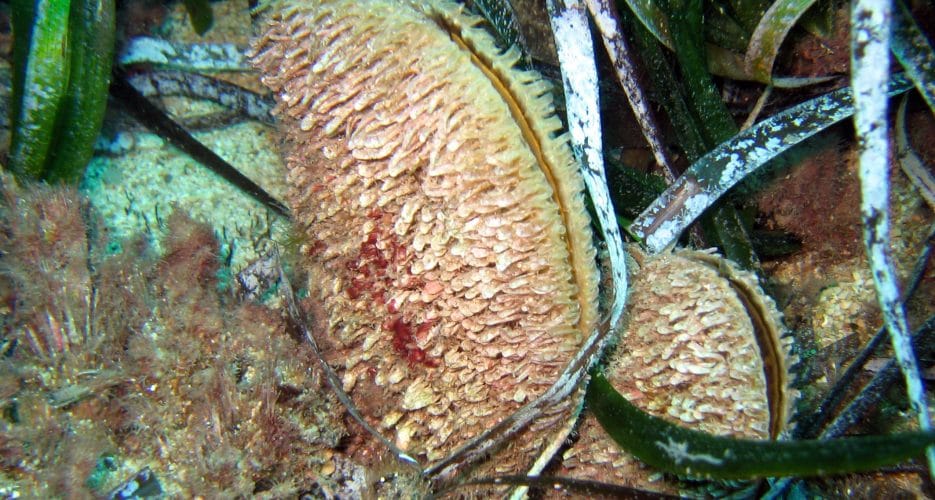 Barely a year ago, the Scandola marine reserve was home to an outstanding population of the fan mussel, Pinna nobilis. Last week, Professor Nardo Vicente could only bear witness to the death of all the fan mussels. Here is his report on the situation.

The situation is worrying.

We are just back from a scientific field survey at the Scandola marine reserve in Corsica, which only a year ago possessed one of the highest densities of this magnificent bivalve shellfish in the western Mediterranean.

Today, they are all dead ! A population we have been monitoring since the 1980s !
There are dead fan mussels scattered all over the seabed.
And this parasitosis is now reaching the coasts of Provence. In September, staff members of the Parc National des Calanques found a dying fan mussel in the Anse du Mugel at La Ciotat. The analysis proved positive for Haplosporidium. Other sick specimens have been observed at various points along the Provencal coast.
At Scandola, well into October, the water was still 22°C at 40 m depth. This was also the case along the whole of the coastline of Provence. It is to be feared that this epizootic outbreak may progressively affect all the Mediterranean coasts, as specimens infected by parasites have been reported at various points in Monaco, Italy, Malta, Tunisia and Greece.

WATERS THAT ARE TOO WARM FAVOUR THE ACTIVITY OF PARASITES

The activity of the parasite responsible for the death of the fan mussels is in fact intensified when the temperature rises. And the water temperatures in the Mediterranean have been consistently high since the beginning of summer. We might therefore assume that global climate change is to a large extent responsible for the outbreak of this epidemic, which affects the largest of the Mediterranean bivalves.
It is probable that the increasingly rapid warming of the waters of the Mediterranean will in the near future affect other species. There have indeed been signs of this for several years now: the collection of larvae that we have been carrying out since the 1990s in the Marine Protected Areas (Port-Cros, Scandola, Côte Bleue marine park) and around the Les Embiez archipelago has enabled us to study the marine biodiversity of these sites.

Thanks to these larvae collection operations, along with young fan mussels, numerous other species from various zoological groups (mollusks, crustaceans, echinoderms, ascidians, fishes) are to be found in the larvae collections. And from 1996 to 2013, we have been able to observe a 30% erosion of the biodiversity of species of mollusks caught, and 70% of small species of invertebrates have disappeared. This phenomenon is likely to get worse in coming years, if nothing is done to slow down the warming of the planet.

Since last winter, many laboratories around the Mediterranean have been constantly monitoring the fan mussel populations, and several hundred individuals in a good state of health have been collected and taken to safety, in particular in Spain. The survival of the species may be at stake.

In addition, there have been shipping disasters such as the one that has recently occurred at Cap Corse, with a potentially catastrophic impact on the living environment, and for the economy. Because of the incompetence of ships’ crews, we are back to the 1970s and the tanker shipwrecks that became so notorious.

And yet, oil pollution is just the tree that hides the forest ..