› Articles › Ecological restoration of the salt pans at Les Embiez 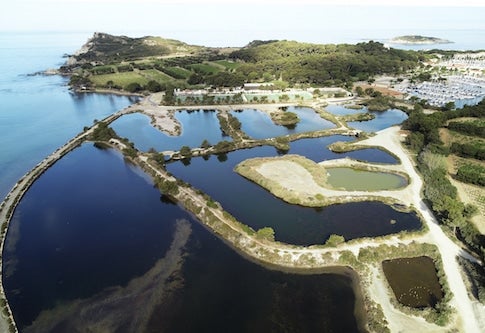 As part of the programme SAR-LAB*, Site Atelier de Restauration écologique de la Lagune du Brusc, the former salt pans are currently benefitting from an ecological restoration operation. The fauna and flora typical of the lagoon environment are again colonising the site, after the re-establishment of the water circulation.

The exchanges of water between the Brusc lagoon and the former salt pans, exploited up until the 1930s, then transformed into an aquatic garden by Paul Ricard, had been gradually interrupted over the decades. Owing to the lack of adequate renewal of the water, the ecosystem had rapidly become degraded. But in January 2020, a channel equipped with a hammer sluice was installed and the water circulation was restored.  There was a rapid return to environmental conditions favourable for the revitalisation of the site, which once again fulfils a range of ecological functions.

A nursery site for fish

Twenty-two fish species, recorded by the Institute’s research team, today benefit from the shallow waters, sheltered and rich in Cymodocea and Zostera seagrass beds: juveniles find there both shelter from predators and abundant food. Gilt-head seabream, white seabream, corkwing wrasse, mullet, seabass and smelt, among other species, spend the first months of their life there, before going into the lagoon and the open sea when they have reached their adult size. This rediscovered nursery function is particularly important for the maintenance of coastal shallow water populations.

The site is also a space for living and assembly for a dozen emblematic bird species of the Mediterranean coasts. There are several species of egret and redshank, and also kingfishers, black-backed gulls, grey heron, black-headed gulls, mallard, plover, curlew, black-winged stilt and pink flamingo. For them, the area is a place to feed and to rest.

In addition to the marine seagrass beds which flourish beneath the surface, the areas bordering the site there develop on land what are known as halophilic plants that are perfectly adapted to a salty environment. Depending on the species, some can survive a little sea spray, while others can live with their roots completely immerged. Their salt tolerance thus determines their localisation in these sometimes hostile environments.

In less than two years, the site has already recovered part of its ecological functioning, as evidenced by the observations regularly carried out by the Institute’s research teams.

* The programme SAR-LAB is funded by the Agence de l’Eau Rhône Méditerranée Corse et and led by the Institut océanographique Paul Ricard.