› Articles › Take Ocean For Future: Korean students at the Institute 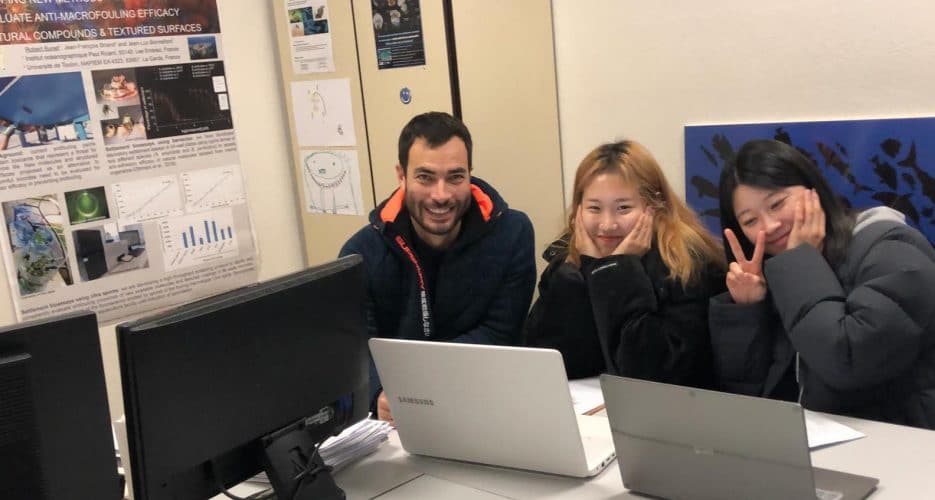 Under the scientific exchange programme between the Institute and the Korean Maritime and Ocean University at Busan, two students have been welcomed this winter at Les Embiez island: supervised by Dr Robert Bunet, So Im Cheon and Eunha Kim have been working on aspects of the genetics of marine organisms.

For the third year running, the Institute’s research laboratory has hosted students from the prestigious KMOU, Korean Maritime and Ocean University, in South Korea. The aim of these exchanges, launched in 2016 at the initiative of Patricia Ricard as part of the programme ‘Take Ocean For Future’, is to generate a common dynamic focused on the major challenges facing ‘our’ Mediterranean and all the world’s oceans. “In the face of climate warming and the threats that menace our environment”, stresses Patricia Ricard, “science and research should today push back their disciplinary, national and cultural frontiers”.

From antifouling to aquaculture

In 2017, Dr Jin-Woo Lee stayed at Les Embiez for a few weeks. He worked in collaboration with Dr Robert Bunet in research on the antifouling properties of marine organisms. Together, they tested various molecules with the aim of finding an alternative to antifouling paints for boats, which are highly polluting and harmful for the environment.
In 2018, the programme Take OFF provided the framework to welcome Bok Il Jang, a young engineer working on the nutrition of aquatic animals. During his stay, he worked on feeds for species in aquaculture, and on alternatives to the use of meal from wild fish, which aggravates overfishing (insect-based meals, etc.).

The plan is to continue and develop these exchanges by including other universities, once the Institute’s new research platform becomes fully operational.