› Articles › The UN Special Envoy for the Oceans at Les Embiez 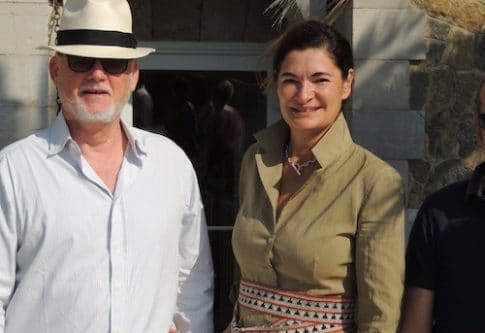 Peter Thomson, United Nations (UN) Special Envoy for the Oceans was this weekend the guest of Patricia Ricard at the island of Les Embiez on the occasion of the Institute’s General Assembly.

This General Assembly was for him an opportunity to hear about certain environmental issues that are specific to the Mediterranean.
In relation with the research carried out by the Institute’s scientists, several themes were discussed, all core issues for the ecological challenges that must be met for the survival of the Ocean: the restoration of coastal shallow water habitats, innovative solutions to make aquaculture more sustainable without generating additional pressure on fisheries stocks, the detection of environmental DNA for better monitoring of the biodiversity.

From the restoration of coastal habitats to the recycling of plastics

Other visiting experts presented various measures for environmental preservation: Chloë Webster, until recently scientific director MedPAN and today consultant, recalled the importance of the setting up of Marine Protected Areas, stressing the fact that what is important is not to set up more and more MPAs, but rather to give them the tools, and the funding, to enable them to really protect their territory; Christian Decugis, among other functions President of the APAM (Association pour la Pêche et les Activités Maritimes), highlighted the role of ‘sentinels of the sea’ fulfilled by the fishers, and reminded us that the most important thing to preserve the resource is “the proper use of fishing gear, even for small boats”. He also recalled that preservation really works, “as evidenced by the bluefin tuna, with a biomass back to 1950s levels, thanks to several years of fishing bans”. Marine Fidelle, of Ecocéan, presented the techniques for rearing the post-larvae of fishes and the installation of biohuts which are a means to increase the survival rate of juveniles. Simon Bernard, of Plastic Odyssey, recalled that “We cannot clean up the oceans”, but we can reduce our use of plastics and learn to valorise them by recycling. Damien Leloup described an operation run by the Walter Munk Foundation for the Oceans in the Altaussee, an Austrian lake which was also impacted by pollution. Finally, Cécile Devillers, an RSE (corporate social responsibility) specialist at Ricard, explained that there has been a real raising of awareness in companies, from the choice of raw materials to end of life management for the objects produced, but that there is still a lack of knowledge for finding the best suited solutions.

Peter Thomson, responsible for the implementation of SDG 14

A series of presentations that fall directly within the field of competence of Peter Thomson. His role is after all to support the implementation of SDG 14, sustainable development goal n°14, marine life, working with all the stakeholders concerned: civil society, the scientific community, the private sector and the other stakeholders.
The aim is in particular to continue to keep up and running the 1 400 or so voluntary commitments made during the Conference on the Oceans, and to see that they are implemented. Formerly the permanent representative of the Fiji islands at the United Nations, this diplomat today devotes all his energy to serving the cause of the oceans. “One breath out of two”, he declared a few months ago, “derives from oxygen produced by the Ocean. So it is time for us to make radical changes“.