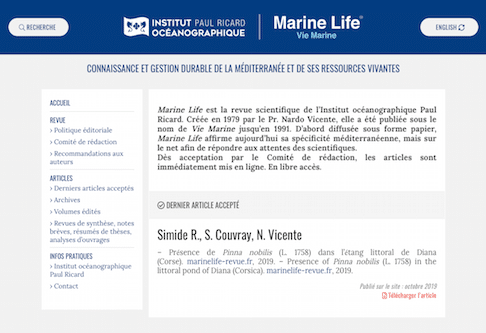 For its fortieth birthday, the scientific journal of the Institut Océanographique Paul Ricard — http://marinelife-revue.fr— has a new look.

Originally published in paper format, the journal Vie Marine (Marine Life) was launched in 1979 by Professor Nardo Vicente, the scientific director of the Institute, and currently Chair of the Editorial Board. The purpose of the journal was to publish the work of researchers at the Institute’s research centre on the Ile des Embiez.

Over the years, Vie Marine moved on to include scientific articles by researchers from other organisations, in phase with international standards, under the impetus of Professor Lucien Laubier, a corresponding member of the French Académie des Sciences. Renamed Marine Life/Vie Marine in 1992, the priority for the journal was to continue to meet the requirements of researchers who were eager to publish their findings as soon as possible. Since 2010, the journal has been exclusively available on the Internet.

As soon as they are accepted by the Editorial Board, articles are immediately available online with free access.

The focus of the journal is still the ‘knowledge and sustainable management of the Mediterranean and its living resources’. It is a valuable tool at the service of scientists for whom the Mediterranean is at the heart of their priorities.