› Articles › The fan mussel is in critical danger of extinction 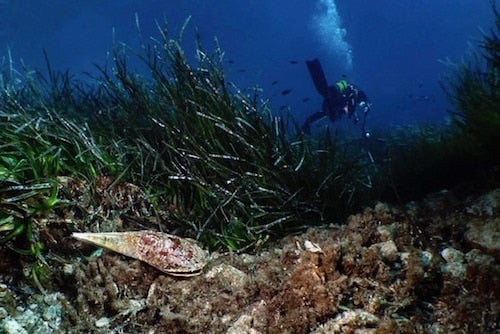 The fan mussel, Pinna Nobilis, has joined the group of Critically Endangered species on the IUCN Red List. A classification that is sad news, the direct consequence of the epizootic which has affected the largest bivalve mollusc in the Mediterranean over the past three years.

The massive mortality of fan mussel populations, let us remember, first occurred in Spain at the end of 2016, in the Alicante region and around the Balearics, where the epizootic wiped out 80 to 100 % of individuals. During the summer of 2017, it progressed to the Catalan coast, then the Gulf of Ajaccio, the marine reserve of Cerbère-Banyuls, and the whole of the coastline of Corsica during the summer of 2018. Since then, the phenomenon has continued to spread around the Mediterranean coasts, and only a few isolated populations still survive.

An endemic species protected since 1992

“In the past,” as the IUCN explains “the main threats were very localised, coming from illegal fishing, loss of habitat, boat anchoring, invasive species, and so on”. But since it was afforded protection in 1992, the fan mussel had recovered to a highly satisfactory population status, in particular in the Marine Protected Areas where density sometimes reached twenty individuals per 100 m2, as for example in the Scandola marine reserve. Today the fan mussel is up against a formidable parasite, Haplosporidium pinnae, “which does not seem to attack other species,” as Prof. Nardo Vicente points out, “such as Pinna rudis, for example”.

A parasite which benefits from the rise in temperatures

And the parasite’s activity increases as the water temperature rises.  As has already been observed for other parasites and viruses, it may have been dormant. Today, it benefits from more favourable conditions owing to the global climate change on the planet and the rise in temperature of the Mediterranean waters: the water does not cool down enough in winter, and reaches record temperatures each summer, sometimes even from the end of spring, which enable the parasite to spread and prosper. In practical terms, we cannot prevent it from spreading, even if several laboratories in Mediterranean countries are currently working to better understand its functioning.

“The natural recovery of impacted populations”, emphasizes the IUCN communiqué, “will depend solely on resistant individuals and on recruitment”. It is thus indispensable to maintain constant surveillance of the populations, as the Institute has been doing in several Marine Protected Areas, such as the Scandola reserve and the Port-Cros National Park; or through the monitoring network for the French part of the populations, from Monaco to Banyuls, managed and coordinated by Prof. Nardo Vicente: researchers and also scuba diving clubs and environmental protection associations continue to help develop it with their observations.

“Since the natural recovery of the populations will depend on recruitment, it is recommended to monitor colonies of larvae at the impacted sites and not affected by means of larval collectors”, according to the communiqué. “We have already been doing that”, explains Nardo Vicente, “by installing larval collectors since 1996 at various sites on the French Mediterranean coasts (Port-Cros, Scandola, Côte Bleue marine park, Les Embiez archipelago). These collectors enable us to record the changes in the marine biodiversity at a given site”.

In the future, should we transplant fan mussels ?

Among the approaches suggested to save the Mediterranean fan mussel, the IUCN also raises the question of the transplantation of individuals, but stresses the risk of displacing “healthy carriers” which might in turn contaminate populations that had hitherto been spared.  Another idea is to implant “juveniles from larval collectors and from breeding operations off site“.

Link to the PinnaSpot programme