› Articles › The fan mussel: grounds for hope from a survey carried out in the Etang de Diana lagoon in Corsica 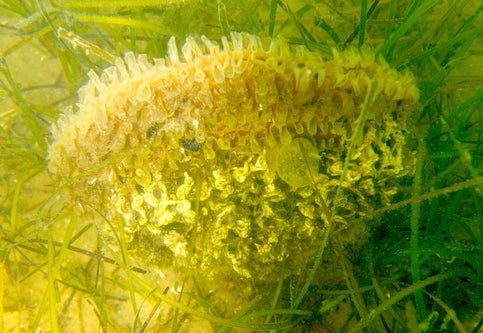 A few months ago, researchers from the Institute carried out a survey of the fan mussel in the Diana lagoon. The population observed is in good health !

Classified by the IUCN on the list of species in critical danger of extinction, following the epizootic infection which has for 3 years impacted the whole of the Mediterranean, the fan mussel’s hope of survival seems to be confined to the environment of lagoons and coastal ponds.

Sites where the bivalve mollusc is showing resistance to epizootic impact

The lagoons and coastal ponds, in particular in the vicinity of major rivers such as the Rhone and the Ebro, are increasingly seen as pockets of resistance where the fan mussel has survived in a good state of health. This is the case at the Etang de Thau lagoon, on the French coast of Languedoc, El Mar Menor in Spain and the Bay of Kotor in Montenegro. In Corsica, where the mortality rate is almost total, even in the Scandola reserve, it was vital to find out whether the coastal ponds there might also offer refuge to the species.  So Professor Nardo Vicente, Dr Sylvain Couvray and Dr Rémy Simide carried out a survey in the Diana lagoon, on the east coast of the island, where the fan mussel populations had already been studied in 1990.

In the lagoon, a dense, healthy fan mussel population

And the observations carried out this year along the shores of the lagoon have revealed a dense, healthy population of fan mussels. The density is in the order of around ten individuals per square metre, about the same rate as that recorded in 1990. And among the fan mussels found there, the researchers detected no sign of recent suspected mortality, which again adds weight to the hypothesis of the existence of pockets of resistance in the coastal lagoons. “It is important to step up the research effort in these areas”, insist the members of the survey team. “The survival of these individuals is vital for the potential introduction in the fairly near future of programmes for restocking or natural reseeding by dispersal of larval flux in the sea.“

Determining whether recruitment is local or of marine origin

It remains to determine the origin of the larvae that have maintained the dynamism of this population: “For the time being”, Nardo Vicente concludes, “we don’t know whether the input of larvae has come from the sea, passing through the entry channel (grau), or whether it is a matter of local recruitment.“  Regular monitoring over time, a new hydrodynamic study of larvae captured in situ and a genetic study of the populations might provide a way to understand the settlement in the Diana lagoon of such large populations of Pinna nobilis, unaffected by the epizootic infection.

Full article available (in French) at the Marine Life website