› Articles › Thau lagoon : the fan mussels are in good health 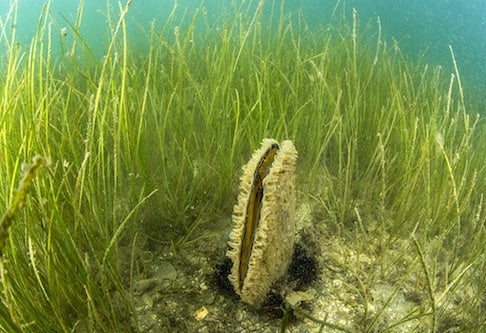 In the face of the epizootic that has impacted the fan mussel since 2016, several Mediterranean lagoons seem to have offered refuge to this species: a study carried out a few weeks ago in Thau lagoon confirms the good state of health of these large shellfish.

Since 2016, the fan mussel Pinna nobilis (L.1758), a species endemic to the Mediterranean, has been victim to an epizootic (a parasitic disease related to a Haplosporidium), that has spread throughout the Mediterranean basin. A protected species under European legislation since 1992 (directive 92/43/EEC), the fan mussel has recently been recognised and classified as ‘in critical danger of extinction’ on the IUCN world red list of endangered species.

But as a team of researchers at the Institute had already observed in the Diana lagoon in Corsica a few months ago, it seems that lagoons constitute refuge areas where the populations aren’t impacted by this parasite.

A population monitored over several years

In the French Occitanie region, the first cases of mortality were reported in 2018, in the Banyuls-sur-Mer area, before the epizootic spread. A new study, carried out in Thau lagoon by Mathieu Foulquié, Renaud Dupuy of Grandrive, Nicolas Dalias and Nardo Vicente, would seem to confirm this hypothesis. The researchers chose to undertake their study at sites where the fan mussel has been monitored for several years, which means they can have a proper basis for comparison. Monitoring surveys were carried out in May and June 2020 among the populations which had already been inventoried.

These new surveys showed that the populations are in a good state of health, with a seemingly natural lower mortality rate, and that they continue to be regularly replenished.