› Articles › 1 OCEAN: a major showcase for the Ocean, a decade of exploration in the 21st century 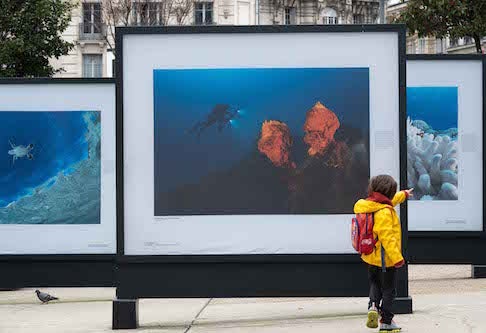 The voyage of exploration 1 OCEAN will take us during the next ten years to all the seas in the world to carry a clear message: with no frontiers, the ocean is unique and its preservation concerns us all. A project supported by the Institut océanographique Paul Ricard.

The adventure starts with 20 pictures by the underwater photographer Alexis Rosenfeld, the project leader. They are exhibited in very large format in the forecourts of the Paris stations Gare de Lyon and Gare du Nord until 30th April by the UNESCO Intergovernmental Oceangraphic Commission and the railway company SNCF Gares & Connexions.

At the start of the UN Decade of Ocean Science for Sustainable Development, coordinated by the UNESCO-IOC, the aim of Alexis Rosenfeld’s photographic project is to combine exploration with sharing. It highlights the central role of knowledge and seeks to mobilise the power of the image to change behaviours, along the lines of the Ocean Literacy concept.

“Sharing knowledge”, insists Vladimir Ryabinin, Executive Secretary of UNESCO-IOC, “transmitting knowledge, spreading awareness of this wonderful world without frontiers, is among the key actions of the UNESCO Intergovernmental Oceanographic Commission. 1 OCEAN will extend the outreach of UNESCO’s environmental concerns among deciders, scientists and the general public.“

1000 photographs for a decade

The pictures exhibited are not only the premise of a vast campaign of exploration. They take us to the Mediterranean but also to New Caledonia to discover the Coral Sea natural park, included on the UNESCO World Heritage list. They will be followed by others, which will reveal a thousand facets of the marine environment, from the living creatures that inhabit it to the scientific research undertaken to better understand them and to protect them. Through the emotions generated by photography, they will invite us to get to know the fragile beauty of the world Ocean, to be aware of the threats that increasingly loom over the ecosystems. “We have a decade to change things,” Alexis Rosenfeld, “and we all have a role to play”.

The year 2021 promises to be a decisive one for the climate, for biodiversity and for the environment. It will be marked by several major international events: COP Climate, COP Biodiversity, the IUCN World Conservation Congress at Marseille.