› Articles › Pinna rudis: Will it come to replace the decimated populations of Pinna nobilis ? 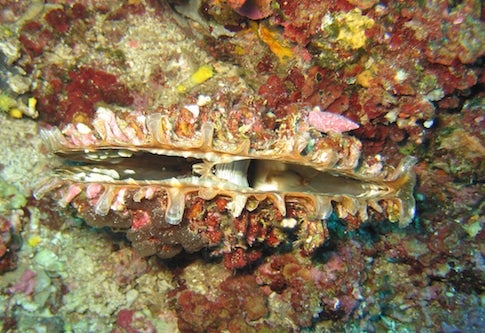 Mainly occurring in the western tropical Atlantic, from the coasts of Africa to the Canaries, the species reached the Mediterranean through the Strait of Gibraltar and settled in the warm waters of southern Spain. For a long time, it remained confined to that area. But for the past ten years, there have been more and more sightings, in Corsica, on the French mainland coasts and in the eastern Mediterranean basin.

Smaller than the fan mussel, and broader, with a brownish colour and recognisable in adulthood by the radial ribs on its shell, the spiny fan-mussel, Pinna rudis, has long been “abundant on the Spanish coasts“, explains Prof. Nardo Vicente, the Institute’s scientific counsellor, “where it is encountered with P. nobilis, constituting intermingled populations“. On the French coasts, it only began to make an appearance in the late 1990s, when a few individuals were sighted in the Scandola marine reserve and nearby.

Larvae carried by the currents

“The presence of numbers of Pinna rudis on the Spanish coasts, from the Strait of Gibraltar to the mouth of the Ebro” Prof. Vincent continues, “suggests that the species arrived from the Atlantic coasts in the form of larvae carried by the surface current flowing into the Mediterranean through the strait”. One branch of this current flows up the Spanish coast and certain of these larvae even managed to progress as far as the Costa Brava, where some of the juveniles were caught at Cadaquès. A second branch of the current flows along the Algerian coast, where Pinna rudis has also been found. Another flows towards the west coasts of Sardinia and Corsica, which no doubt explains its arrival in the Scandola reserve. “But this input“, explains Nardo Vicente, “must entail a considerable loss of larvae, which would explain the sporadic occurrence of this species.  It would be worth undertaking a more detailed study of the local current patterns”.

Populations that are still scattered

The spiny fan-mussels that have been sighted are generally found on the coralligenous bottoms, down to around forty metres depth, but some also settle at shallow depths on the edges of the Posidonia oceanica meadows, or on rocky shallow bottoms.  But for the time being, even if sightings are on the increase along our coasts, they remain occasional and always scattered. For large populations of the spiny fan-mussel to really settle on our coasts, the drift of the larvae would not be enough. It would be necessary for the species to reproduce here, “as was the case for P. nobilis, before the outbreak of the epizootic, or for a greater number of larvae to arrive, drifting with the currents, and settle in favourable zones. On the Costa Brava (Tort et al. 1995, Vicente, 1995), larval capture of the two species was carried out, and the grow-out of young recruits achieved in baskets suspended in the open sea.

A species unaffected by the current epizootic

“The populations of Pinna nobilis”, recalls Nardo Vicente, “have been decimated since autumn 2016, along the whole of the Mediterranean coasts, by a specific parasite Haplosporidium pinnae, which does not seem to have any effect Pinna rudis (Vazquez-Luis et al. 2017).” It might therefore be imagined that, with climate change and the warming of the water, which seem to favour the flourishing of Pinna rudis, the species might settle little by little on our coasts, and end up reaching the whole of the Mediterranean.

It would appear too, even if there has not yet been enough observation and experimentation to affirm it with any certainty, that there exist hybrids between the two species, which would also prove resistant to the devastating parasite. Researchers now plan to pursue their investigations along these lines, and in particular to carry out new genetic analyses, after a first analysis of the sequencing of the genome of Pinna nobilis achieved under the direction of Dr Bunet, Director of Research at the Institute (Bunet et al. 2020).

Read the whole article (in French) on the Marine Life website