› Articles › Corsica : the fan mussel is holding out 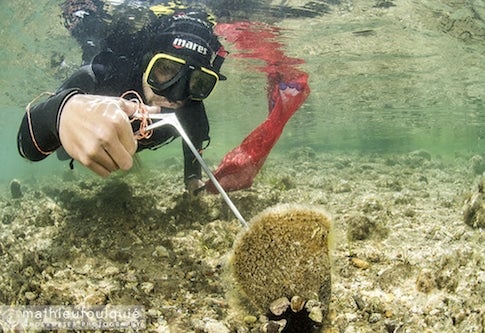 In the course of surveys carried out at the end of May 2021 in the Diana, Urbinu and Balistra lagoons, a team of scientists from the Institut Océanographique Paul Ricard were able to draw up a first assessment of the survival status of the fan mussel, Pinna nobilis, a protected emblematic and endemic Mediterranean species. The results are promising.

Since 2016, the fan mussel P. nobilis has been victim to an epizootic (parasitosis linked to a Haplosporidium), widespread throughout the Mediterranean basin, causing massive mortality. The species has been protected at European level since 1992 (Directive 92/43/CEE), and has recently been recognised and classified as ‘in critical danger of extinction’ in the IUCN** red list of threatened species. But the fan mussel, on the brink of extinction, seems to have found refuge in certain coastal lagoons, notably in Corsica.

In Corsica the first cases of mortality were reported in 2017, in the Ajaccio area, and at the end of 2018 in the Scandula Natural Reserve, where all the known individuals were wiped out. Recently, certain populations unaffected by this parasite have been observed in Mediterranean lagoons. In the context of this epidemic, and with the aim of establishing a first assessment in what might constitute ‘refuges’, a survey was carried out from 24 to 28 May 2021 among fan mussel populations, some of them already previously monitored, in the Diana, Urbinu and Balistra lagoons.

In the Balistra lagoon, the survey confirmed the absence of live individuals in the known sector in the eastern part of the lagoon. No live fan mussel or recent recruitment of juveniles was observed. Only four dead individuals (earlier deaths) already reported by the association Corse Images Sous-marines in the spring of 2020 were found.

The observations carried out in the Urbinu lagoon (with permission and logistical support provided by the Conservatoire du Littoral) enabled identification along the lido to the south of the grau (currently closed) of 2 stands of old fan mussels, all dead for several years. A single living adult individual (with a total height of about 40 cm) was observed to the north of the grau. In this sector, the vast and dense Cymodocea meadow was partly covered by a thick carpet of filamentous algae of the genus Cladophora, which made it difficult to detect any possible juvenile fan mussel individuals in the meadow underneath. A further visit to the site in the autumn or earlier in the season (when the algae are absent) would make it possible to make more precise observations. Similarly, new surveys will be carried out in the sectors further away from the grau in order to provide a more complete survey of this lagoon which has very high potential as a refuge for the fan mussel.

In the Diana lagoon, the presence of populations of the fan mussel has been known since 1990 thanks in particular to the work of Béatrice de Gaulejac and Nardo Vicente. In 2019, during a survey by researchers from the IOPR, the density observed at a single site was always high (around 8 fan mussels/100m²). The new surveys carried out at several stations (including those of 2019) provide a basis for reassessing the situation in this lagoon.

With the cooperation and technical support of M. Pantalacci and his staff (SARL Etang de Diana), the IOPR team were able to carry out the following actions:

At a second station, 2 additional transects were performed on a population of old dead fan mussels (earlier deaths), and a larval capture device was installed in the south of the lagoon.

The team also went back to the station studied in 2019, where a second larval capture device was installed, and where 8 live individuals were tagged, among a fairly dense population of live juveniles and sub-adults (up to 3 individuals/m² at each place). Millimetre-scale sampling of the mantel was carried out on 10 individuals using biopsy pincers (a technique that causes no harm to the individuals sampled). These samples will serve to perform genetic studies for comparison with other populations in the open sea or in other lagoons, and for the possible detection of the parasite. For this purpose, sediment samples were also taken to test for the possible presence of the parasite, using molecular biology techniques.

Finally, during a rapid survey to the north of the shellfish farm situated on the west bank a residual stand of sixty or so old fan mussels was observed (all dead for several years), settled in a dense Cymodocea nodosa meadow.

In conclusion, if the preliminary inventories carried out in the Urbinu and Balistra lagoons have for the moment proved inconclusive as concerns the live populations and the recent recruitment of young individuals (but which nonetheless merit confirmation over the whole of these two lagoons), the number of individuals in good health and aged about 2 years recorded in the Diana lagoon shows that recent recruitment has occurred. These observations offer new hope given that these lagoons present a strong potential in terms of pockets of resistance and renewal of the species, and as a site that is propitious for the future reintroduction of juveniles resulting from larval capture.

** Since they concern a protected species, the activities performed in the course of this survey were subject to Arrêté Préfectoral n° 2B-2020-12-21-008.

To find out more :