› Articles › The Fan Mussel: the outlook still promising in the lagoons of Corsica 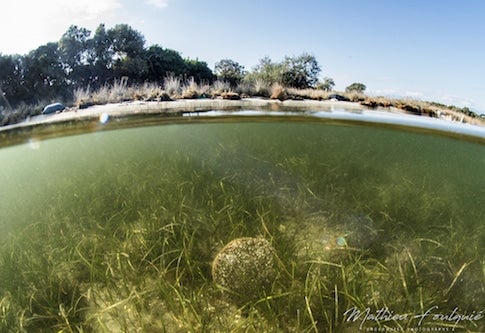 At the end of October, the team from the Institute* was back in Corsica, in partnership with the Corsican environmental agency OEC (Office de l’Environnement de la Corse), to measure the growth rate of the fan mussels tagged in the spring, collect samples from the collectors in place, and continue the survey over more extensive sites. The lagoons’ role as pocket of resistance against the epizootic is confirmed.

“This mission”, the researchers explained, “has enabled us to confirm the good state of health of the population in the Etang de Diana where the individuals measured and tagged in May 2021 during the first survey are still alive and still growing.

Of the two stations at the Diana lagoon where eighteen fan mussels were measured and tagged in May 2021,” they explained, “only one was found dead. The living individuals were measured again, and show after a period of six months an excellent growth rate. Other individuals have been inventoried, and the confirm the high density of the population in the Cymodocea seagrass bed in the Diana lagoon. In these same sectors, the presence of numerous individuals of the same age indicates in places a density higher than 20 individuals/100m².”

During this recent mission, the team was also able to carry out a more extensive survey than during the earlier visits. Through observations carried out at two lagoons, Diana and Urbinu, using underwater scooters, the extent of the Cymodocea nodosa meadows favourable for the installation of P. nobilis was measured. “These seagrass meadows” the researchers were surprised to observe “are much denser in the Urbinu lagoon and yet very sparsely occupied by the fan mussel. Only three living individuals were observed in the sector situated at two sites significantly far apart. Some very old dead fan mussels were also observed in the sector situated to the south of the channel outlet. An analysis of the physical and chemical data and their changes over time should be carried out to try to explain this distribution of resistant individuals.”

The larval collectors installed in the spring did not this time provide any young recruits of P. nobilis. On the other hand, the sampling of the collectors did reveal the presence of numerous ascidians and exotic crustaceans. Among them, the American crab, Rhithropanopeus harrisii, also called mud crab, hitherto unknown in this area, seems to have settled in the Corsican lagoons. The collectors were also abundantly colonised by a cosmopolitan species of Tunicate, Styela plicata, originating in the Pacific, and described in many lagoons and ponds around the Mediterranean coast. The prospection carried out in the Urbinu lagoon also confirmed the expansion of the tropical alga Caulerpa cylindracea, in particular in the sector to the north of the channel outlet.

“If the preliminary surveys carried out at the Urbinu lagoon have for the moment proved inconclusive in terms of living populations and the recent recruitment of young individuals,” the researchers concluded, “the number of individuals recorded in good health and aged about two years in the Etang de Diana shows here that recent recruitment has occurred. These observations offer fresh hope that these lagoons may present a strong potential in terms of pockets of resistance and the renewal of the species, and as sites that are propitious for the possible reimplantation of juveniles issued from larval capture.”

Since Pinna nobilis is a protected species, the activities undertaken during this mission were performed in compliance with French legislation (Arrêté Préfectoral n° 2B-2020-12-21-008).

The French Ministère de la Transition Ecologique (ministry of ecological transition) organised in March 2021 a work group with representatives of the administration, decentralised and territorial services and the OFB (Office for Biodiversity), focused on the Fan Mussel, to get a progress report on work on conservation projects and to discuss the follow-up. Nardo Vicente and Marie Garrido (Observatoire Régional des Zones Humides de Corse, Pôle-relais lagunes Méditerranéennes, Office de l’Environnement de la Corse) were associated with this work group.

To find out more: